There are in principle four types of local authority, though within each typology there are marked differences.

County, District and Borough Councils have sometimes been amalgamated into:

The House of Commons has published a very helpful briefing paper on unitary local government.

In addition, within more rural areas, there is a lower tier of Town and Parish Councils.

As administrative areas many have been in existence for over a millennium tracing their history back to localities that the crown could call upon for taxation and the raising of armies. This historical perspective must not be underestimated in the minds of the public as they can define very strong local associations and be significant in creating local and regional identities.

In addition to the above the previous fifteen years or so has seen the creation of what are termed ‘Unitary County Councils’ – as a simple explanation they are local authorities that have maintained their geographical boundaries on the whole but absorbed the roles, functions and services of District and Borough councils that were contained within their boundaries.

(N.B to all intents and purposes these are very similar.  Certain ancient authorities have retained ‘Borough’ status – a term that reflects the granting in ancient times by a monarch the right to a self-governing walled township)

One important aspect to the district council is that it can serve as a way of offering distinctiveness to a locality, whilst larger geographical areas (Counties) have significant local variations within them one key argument for District councils is that they define place. Later, we will explore the complex issues of how local government is financed but in two tier areas the role of the District council as the collector of taxes is paramount.

Larger urban and industrialised areas and the larger cities in England are covered by Metropolitan councils, there are 36 such councils mostly based on large city areas and regions.  Examples are Sheffield, Newcastle upon Tyne and Liverpool City Council. However, areas such as Kirklees cover agglomerated areas of West Yorkshire around Huddersfield and the heavy woollen district as it was known and Trafford forming as large area to the south of Manchester. What is key to these authorities is that are single tier or ‘unitary’ in function. Whilst the counties contain the district and Borough councils these metropolitan councils encompass all the functions that each of the others do.

To further complicate matters, other unitary councils have been introduced in England since the late 1900s.  These combine what were formerly County, District and Borough Councils.

These have taken slightly different forms, for instance following a government review the county of Northumberland became a unitary county on abolition of the districts it contained and Wiltshire also. The review of 2008 of Cheshire took a somewhat different approach in the creation of two unitary councils out the original two-tier approach there, the creation of Chester and West Cheshire and East Cheshire as two unitary councils was seen to be the most effective solution. Whilst there are clear economic reasons why such reorganisation take place, not least being the economies of scale that can be created but as the populations of locations change there is a requirement to manage the local governance and administration in a way that reflects this. As of 2020 there are suggestions of further change and reform to the administrative map of England reflecting the needs of local people.

This map shows the unitary councils, and which of these have mayors. 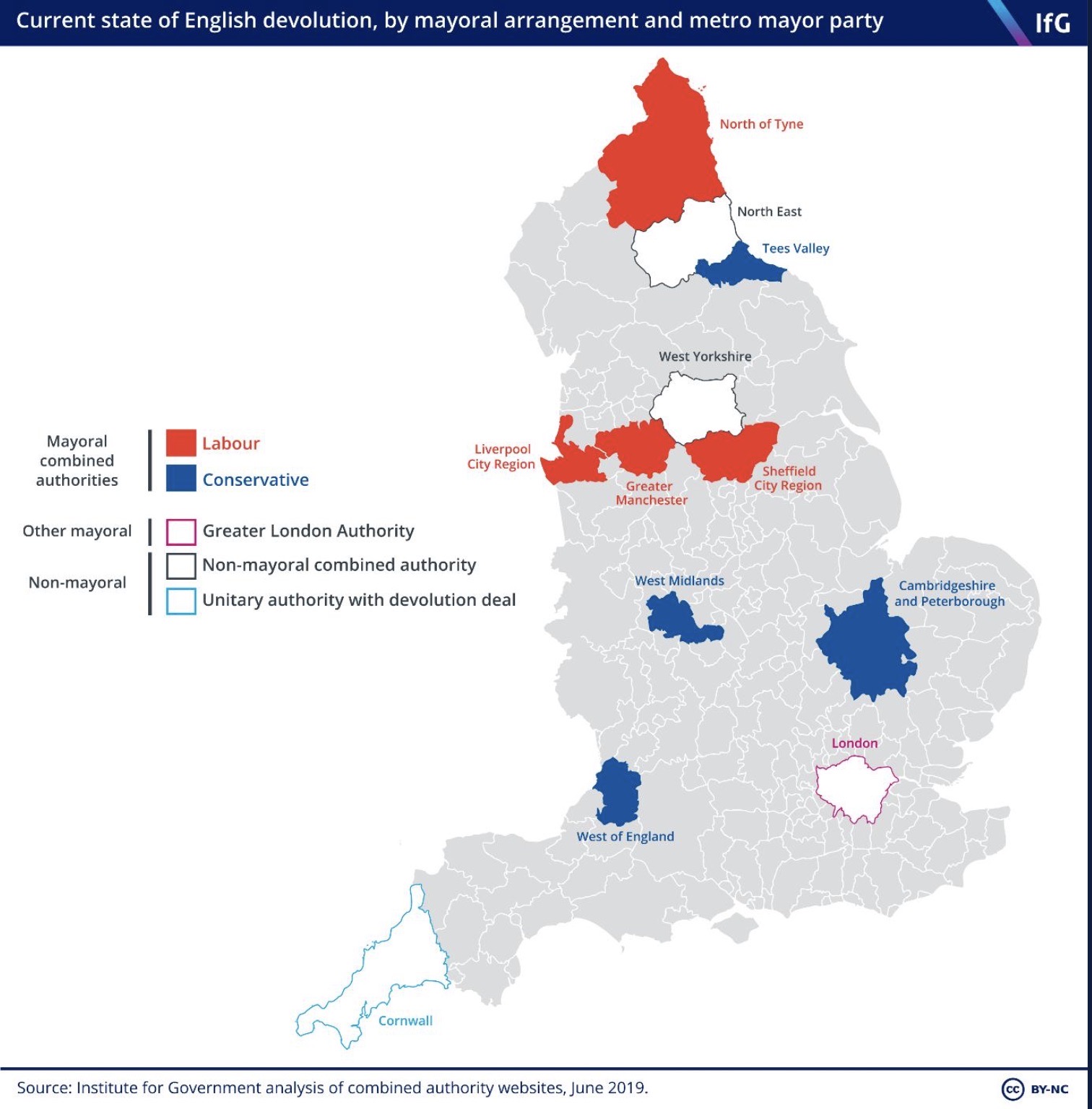 London has long been seen as a special case in UK local government.  The pre-COVID population was around 9.3 million, compared with a 2011 census figure of 8.1 million suggesting a highly rapid growth rate not seen since the eighteenth century.  Consequently, the provision of services to such a population requires a form of administration that has high level strategic capabilities as well as an ability to reflect the needs as felt locally. The speed of population growth and the transient nature of a significant proportion of those who live and work in the city results in huge pressures and demands on services.

Today, London has a strategic authority with an elected mayor, the Greater London Authority, and 32 Boroughs providing a range of services, plus the ancient City of London.

The population of each Borough varies between just under 200.000 (Kensington and Chelsea is 160k, Barnet over 350k).  – in addition the corporation of London covering the ‘square mile’ with a population of a little over 7k (2018 figures).

Follow this link for a more detailed history and lots of maps.

Spotted something wrong?
Please do drop me an email if you spot anything that is out-of-date, or any other errors, typos or faulty links.