This website provide easily accessible information about the structure and working practices of local government in the UK.

It builds on - and adds up-to-date comment, analysis and information to - the NAO's 2017 Guide to Local Authorities.

The systems and patterns of local government are not consistent across the UK.  The devolution arrangements for to Scotland, Wales and Northern Ireland differ between themselves as well as being fundamentally different from the pattern in England.  This website currently describes local government in England.  There is, in the other countries, a closer relationship between national and local government policy, funding and practice than that existing in England.   Examples are around education, (especially educational funding and control), police and Fire and emergency services, aspects of health and social care, special planning, economic development and environmental management. 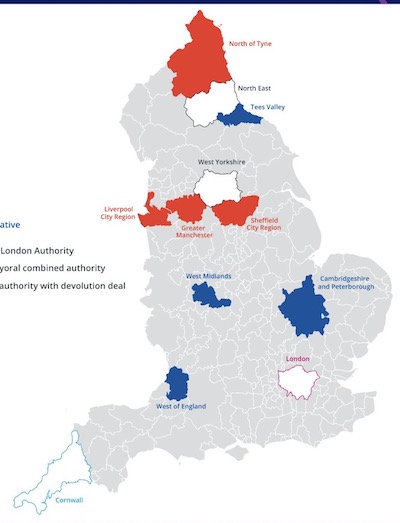 There are in principle four types of local authority, though there are marked differences within each typology.

In addition, within more rural areas a lower tier of council exists – the Parish and Town Council,

As with other aspects of local government in the UK it is misleading to offer too many generalisations but ...

The Local Government Association publish regular polls summarising residents' satisfaction with the quality etc. of the services provided by their local councils.  A 2020 poll is here and others can be accessed via the LGA website.

How is Local Government Financed?

Local authorities receive money from central government and raise money locally through taxes and charges.  The relationship with, and funding from, central government is described in a separate section below.  This section of the website focusses on the fundamental issue of the ability of the council (local authority) to raise taxes to pay for local services.

To explain exactly how and why this occurs would occupy an entire volume, yet in it most basic sense the council has powers to raise taxes from residents to pay for services it offers. Those services are based upon the need to protect those who are deemed to vulnerable in society, to protect the health and wellbeing of citizens, to protect and where applicable enhance the environment and to be the arbiter of decisions that protect the ‘normal way of life’ of citizens.

As noted below, central government has slashed central funding of local council expenditure.  Some councils have as a result been tempted to enter into commercial investments in order to bolster their income.  But higher income from investments is inevitable associated with greater risk, and both Northamptonshire (in 2018) and Croydon (in 2020) were forced to issue Section 114 notices (in affect announcing their bankruptcy) which in turn forced them into even more severe spending cuts. 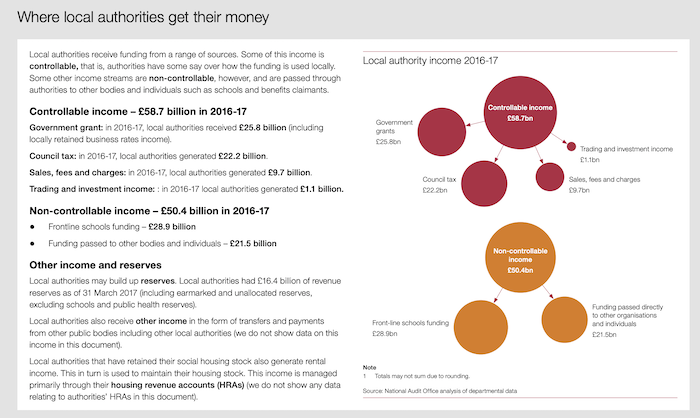 The Relationship with Central Government

There are three overlapping aspects to this key relationship. 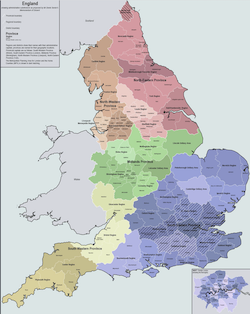 The 1969 Redcliffe-Maud Report report recommended the abolition of all the existing county, county borough, borough, urban district and rural district councils, which had been created at the end of the 19th century, and replacing them with new unitary authorities. These new unitary authorities were largely based on major towns, which acted as regional employment, commercial, social and recreational centres and took into account local transport infrastructure and travel patterns.  There were to be 58 new unitary authorities and three metropolitan areas (Merseyside, South East Lancashire/North East Cheshire or 'Selnec' and West Midlands), which were to be sub-divided into lower tier metropolitan districts. These new authorities, along with Greater London were to be grouped into eight regions, each with its own regional council.  But no government has since felt able to implement Redcliffe-Maud's recommendations.

There was an interesting dissenting report by Derek Senior, recommending the creation of French-style provinces - see map to the left.   You can click on it to see a larger version.

Over 50 years later, David Higham argued that 'All in all, it is hard to identify any real progress since 1969 when Harold Wilson said, in reference to the Redcliffe Maud report, “It is my hope that the reorganisation of local government will provide an opportunity and the incentive …..for a fresh attack on (this) problem of central financial control”.'  His blog is here.

Government Offices for the English Regions were established in 1994.  Until 2011, when they were abolished, they were the primary means by which a wide range of national policies and programmes were delivered in the regions of England.

Follow this link to read David Higham's fascinating 'lessons learned' analysis and history of Government Offices.  But others were less keen on GOs, arguing that Whitehall departments' regional offices generally worked well together, and the the imposition of GOs reduced their collective impact, not least because appointment as Regional Director was never a good career move for an ambitious Mandarin, who may have felt little emotional connection with 'their' region and probably felt greater loyalty to their head office in London.

The absence of strong regional entities, together with the financial weakening of local government (see below) may well have been a factor in the weaknesses in the government's response to the 2020 COVID-19 pandemic - see for instance the Manchester Evening News report No Way to Run a Country.

Follow this link to read a short note by David Higham - The Challenge of Levelling Up Economic Decision-Making.

Government funding for local authorities has fallen by an estimated 49.1% in real terms from 2010-11 to 2017-18. This equates to a 28.6% real-terms reduction in ‘spending power’ (government funding and council tax).    Follow this link for further detail and debate.

There are arguments both for and against the limitations that are placed upon the powers that local government has by central government.

The other view is that local authorities know best what local people want and should have powers that enable them to deliver. Clearly when strong political influences are at play there have been times when central government has perceived this to be a direct challenge to the overall authority of central government.  This does introduce the issue of the role of local political policy, for most councillors are elected as representatives of formal political parties and there will be political pressure for councils with a working majority to have policies that reflect the national policies of that party.

Follow this link to read Ian Briggs' summary of a number of contentious issues that were causing concern in 2020.

How Decisions Are Made

Here, again, we are looking at a system that has many variations and approaches.  The notion of a separation of powers between the elected and those who are employed much like most central government systems can be found in UK local government.  A common myth is that those who are employed within UK local government are ‘civil servants. They are in fact technically employed by the elected councillors and not the UK or devolved Governments.

In most respects the decisions that are made by local authorities that impact upon local people are made by the councillors.  However, there are processes of delegations that allow the employees (referred to as officers) to make decisions within the boundaries of policies and procedures that are laid down and are transparent and contained within local constitutional arrangements.  A council’s constitution has both certain flexibilities and other legal compliances.  The compliances are laid down within Acts of Parliament, some being specifically related to local government, others related to other forms of regulation affecting more than local government.

Councillors, Voters and the Public

For decades, all local councils have wrestled with the issues of public engagement.

As an example, we only have to look at the data on turnout at local elections. Political scientists have long researched the reasons why people vote, and the policies of national parties can and do have a significant impact on local elections despite the presence of local manifestos of parties. Where there is dissatisfaction with the actions of government this influence is carried through to local issues. In the UK as a whole, generally the turnout at local elections is much lower than in general elections.  Even in certain localities that are seen to be highly political active, turnout in local elections can be significantly less.  The conclusion that is often drawn that the public are less concerned with the election of their councils than they are of the parliament.

There are ‘hot spots’ where contentious issues prevail, the closure of hospitals being a prime example.  Where people feel that any service to the public is less than satisfactory then this can be played through to local elections but it remains an issue for local government to press the credentials for democratic representation at the local level.

When councils seek the opinion of residents about the quality of services they receive by and large the opinion is good, as an example a key issue for local councils is the collection of household waste.  Although there are certainly huge variations in the quality and reliability of the service from one place to another most people consistently report positive levels of satisfaction. However, to complicate matters, it is not uncommon for residents to feel that nationally the quality of service is poor, but they feel ‘lucky’ that where they live, they have a good service.

Another litmus test of how the resident feels about local government is the struggle that political parties can have in encouraging people to stand for election,    Clearly, it is important for local government to have those who sit in control of local services to be representative of the local population, yet an investigation into the data on the age range of councillors clearly points to the overwhelming predominance of older people standing.

When residents are asked if they are receiving value for money in respect of their payments of council tax then again evidence suggest that councils have some distance to go in proving that they are spending in a prudent and economical manner. In part this may be due to the absence of any meaningful reform of the system. (The amount of tax that residents pay is based upon an imprecise system of value of property.)   But other factors include the reporting of the national and local media on council spending and a challenge that councils have in effectively communicating what their priorities are.

Jonathan Myerson wrote an entertaining and informative description ( Stranger than Fiction ) of his time as a Councillor in the London Borough of Lambeth between 2002 and 2006.

Local government history goes back a very long way.   Here are links to some interesting information:

Other Sources of Information

A sensible first place to look will be the website of the Local Government Association.

Further information about these websites, and my contact details, are here.

Spotted something wrong?
Please do drop me an email if you spot anything that is out-of-date, or any other errors, typos or faulty links.